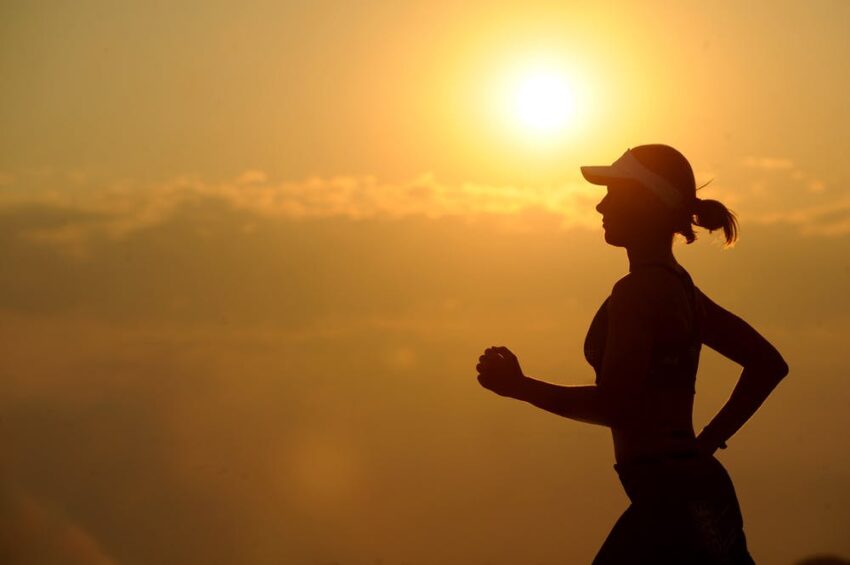 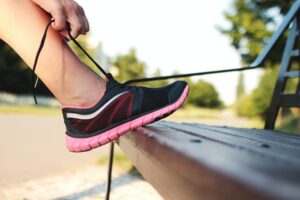 The time has come to tell the stories of my fitness journey.  Recently, I shared in a small group the “fun fact” that I once competed in body building.  It drew a lot of attention with ahhhs and ooohs but, even all these years later, talking about it still brought my tears because of what a pain-filled time that was and, in some ways, continues to be.  However, it became clear to me that my experience was of interest and that some people may actually need to hear it to sort out their own pursuits.

If I could counsel younger Sharon, these are the life lessons I would draw from.  The anger and bitterness that I used as fuel to prove my worth…the extremes I went to…were hard on my body and miles away from being healthy.  In the long run, pain I caused myself has been far greater than the initial wounds.  These are the experiences developing marathon mentality in me.

It’s too lengthy a narrative to put into one post, so I hope you’ll persevere with me as I tell it over time.

In those early days at the athletic club,  I had just resigned my job with a company that, at management level, had a dynamic of powerplay, jealousy, blame shifting and control.  I’d tried my best to navigate that environment, but I did not have the skillset required.  I left a hot mess.  Without a job and cut to the core, I began pouring my pain into working out at the gym.

“That’s a good thing to do!”  More than one person has interjected at this point.  Except it’s not God’s example for healing and hurting yourself is only a good choice when the alternative is killing someone else.

SETTING UP THE BLOCKS

I was wounded and I was angry.  So, it did not take long for me to become physically hurt, and I began physical therapy for bursitis in my shoulder.  It was recommended that I work on strength under guidance, employing a trainer. 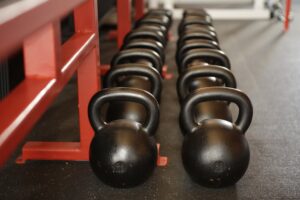 There was a trainer in the gym who had caught my eye.  He was tall and broad with biceps bulging.  He laughed loud and had charisma.  I was drawn to the flame that had already burnt me.  Yet I was unaware that he resembled others that had done their damage to my heart.

Returning to the fire was attention seeking…a love search.  I was starved for affirmation and looking for it in all sorts of worldly ways; first through work and now via workouts.

It’s funny, I remember only a few conversations with the trainer I hired (and actually struggled to remember his name just now), though I’ve spent hours under his tutelage.  I recollect talking, early on, about how I wanted to gain a certain physical status.  It may have been size, a certain weight or about gaining muscle mass, I honestly don’t recall.  But I said at the time, it was because menopause would be brutal, and I knew it was right around the corner.

PUSHING PAST THE STITCH

I was afraid of what was coming.  I was scared of gaining weight…becoming yet more unlovable than I felt I already was.  I worried about losing what I still had.  Losing even more.

I was behaving like a child who lost one parent and was desperate not to lose the other.

I poured into exercising with that fear pushing me hard.  And I had a young hunk of a coach praising me all the way.  At one point, seeing how hard I pushed, he asked, “What’s your rush?”  Maybe that question was the precursor to the menopause answer, I’m not sure, but my rush was in running from the beast I thought was chasing me. 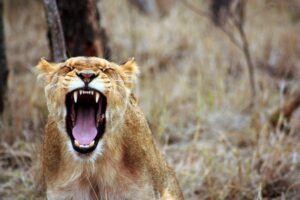 I chose to set a lofty goal.  I would run the Eugene Marathon that was set for a short four months away.  An impressive bar to be sure!  Who could deny that running 26.2 miles was a big deal?  If I pulled that off, wouldn’t I be the big deal?  Of course, I didn’t actually think that at the time.  I did not understand the undercurrent beliefs behind my actions.

PICKING UP THE PACE

I’d only been running 3-5 miles at a time a few days a week, a long way from where I needed to be.  Online I found a 14 week training schedule and ran it past my trainer.  We both knew I was pushing it, but he was supportive and said he’d help.  His role shifted from injury recovery to making an athlete.  I think his pectoral muscles puffed up with the change.  I’d become a dream client.

Cross training (mixing both strength and cardio exercises rather than only doing one thing) was the plan that would assist me in accomplishing my target with less likelihood of injury.  My shoulder was now solid, and I was feeling strong.  All I had to do was show up for strength training weekly, receive my iron pumping to-do list for the rest of the week and follow the running schedule.  In my spare time, I’d be mother to my children, run a household and be a loving spouse.  But training, for me, came first.

Six weeks into the plan I went on vacation with my family.  I was determined to stay on target by running daily and performing squats, lunges, pushups and sit ups by the hundreds.  I was terrified that the break in my gym routine meant failure to achieve my grandiose goal.

Fear breaks down even the strongest of people by beating them down with their own anxiety.

I admit, I don’t know the physiology of hormones in the body, but I became an expert in running on adrenaline.  I was no respecter of rest, unaware that rest is where repair takes place.  By this point, I’d been running so hard I believed I was being hunted.  When you’re fleeing, you cannot see accurately around you.  The beast I was trying to outrun was me. 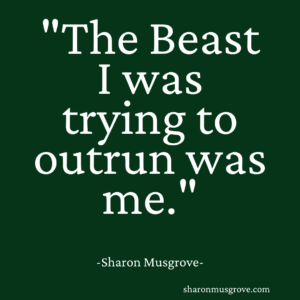 I tore my achilles tendon on that Maui vacation.  It was not severe but an overuse warning.  Wisdom was not with me on that trip, I was traveling with fear instead.  It was an anxiety that had grown with the adrenaline I had been feeding it.

Did you know you can use your own hormones as drugs?  Adrenaline is home grown speed.  When that runs low there’s caffeine to move you through the day.  And sugar.  There are plenty of fixes that are legal.

Limping home, I swapped the pool for the pavement to continue logging miles.  I jogged in the water.  All the other workouts, except with my trainer, I was also plugged into music.  I had a playlist that I loved and that I used to pump me up.  Not so in the pool.  In those days, my iPod could not get wet.  So, I slogged through each session, dragging along my (now) shortened attention span like a toddler through a clothing store.  My habit had been fast and furious, the pool was slow and silent.

In the silence fears can get loud.

With the race only six weeks away, I faced the fact that I was not going to be prepared for the full marathon.  My heart ached as reality revealed itself.  It wasn’t the race that mattered, I was aware it was the falling short of proving my worth.  I went ahead and signed up for the half marathon in effort to keep from utter collapse, but truthfully, I saw it as mediocre.  It put me in a class of mediocre.

My training slacked and my pace slowed.  I felt tired.  Really tired. 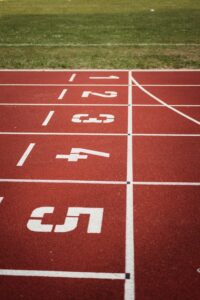 With both legs now strong, I spent more time running the road and less time in the gym.  I figured I needed to train on the surfaces I’d soon be racing on.  I showed up for my Monday strength training, but the streets were my focus.  It was spring and the fresh air seemed helpful.

IN SIGHT OF THE FINISH

I ran that half marathon May 1, 2010.  Surprisingly, I thoroughly enjoyed it!  I wasn’t competing against anyone, not even myself.  I was out, with hundreds of others, just seeing how far I could go.

I’ll never forget the leg of the race, around mile six, when a voice called out my name.  My daughter’s teacher stood on the side of the road waving excitedly!  She, among countless strangers, was clapping and cheering me on!  It boosted me.  It was an affirmation I’d sought for a long time.

My kids and husband met me at the finish line.  These were the people who had held me in sacred and highest regard and were awaiting my arrival!  These three meant the world to me and here they were praising me!  How had I lost sight of who and what was important?

In hindsight, I can now see a greater picture through the love of my three people.  Heaven holds another Trinity who are awaiting my arrival.  They too are eager and expectant and don’t care about my ratings across the finish line.  They love me even during my injuries and challenges, celebrating my life despite my tendency to strive for validation.  What a good God!

Sometimes I forget about the true priorities of my life.  I lose vision for the distance, caught up in emotional short-sightedness.  The day after day can be a slog.  It can be rough and filled with pain-producing people interactions.  This is distracting me from putting energy into the race I am still running.  I am developing a marathon mentality, a focus on taking doable steps that will eventually get me the desired end results.

I’d love to say that I learned a great lesson that day about worth and striving and seeing the gifts I have in front of me, but at that point in my timeline, the course on God’s love was only a short way into its syllabus.  My education had more chapters to go!

I hope you’ll stay tuned for Part 2 of my fitness journey and mental makeover.  It’s just getting to the juicy parts of diet, body building and lust of the flesh!