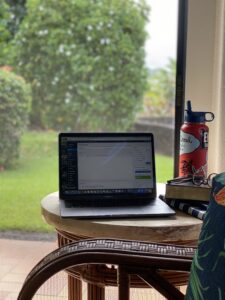 I’m currently sitting in an Airbnb in Kailua-Kona, Hawaii, with the ocean out one window and a luscious green space of tropical foliage before me.  How did I get here?  It wasn’t an accident, let me tell you!  The story behind what brings me to this point in time is one part effort and two parts blessing.  It’s a recipe for a tasty dish in the making, one that grows deeper and richer the longer I stir.  I’m excited about what’s cooking and perhaps I can offer you a sampling right now.

In February of 1993, I married my husband, Jeff.  Our first, non-business related vacation together, not including our honeymoon, was a trip to Hawaii. (Note:  Most of our traveling has been business related).  This trip was in September 1994.  At that time, we went to Oahu, touring the sites of Honolulu and watching the Oregon Ducks play football in Aloha Stadium.  We jumped islands, spending the next few days in Kailua-Kona, Hawaii.  Here we snorkeled, and attended a traditional Luau, but most of our time was spent just relaxing in the sun, each of us reading a book.  The stresses of business ownership went from intense white to golden bronze as we soaked up time without duty.

LOOKING FOR A GOOD RECIPE

A second trip to the Islands landed us on Kauai.  We stayed in Poipu on the south shore.  Here the weather was cooler with more rain.  It was a weather pattern that carved the velvety hills and powerful waterfalls of this “Garden Isle.”  As typical tourists, we drove north, visiting the high surf the North Shore is famous for.  Another day, we headed west, following the Na Pali coastline.  The copper tones of Waimea Canyon were breathtaking.

I was being seduced, as was Jeff, by this part of the world.  The sites were so different from our Pacific Northwest home, but, honestly, it was the quaint towns of this particular island that I loved most.  People greeted with smiles. Strangers made eye contact.  It wasn’t just a place to getaway from the “real life”, but a place of connection one-on-one.  It felt like what I expected home to be like.  A grocer welcomed.  A neighbor waved.  Travelers told stories to strangers at the next table.

I found Aloha; a word that means love, compassion, sympathy and kindness.  According to Wikipedia, it’s “a term used by native Hawaiians to define a force that holds together existence.”

Isn’t that a powerful concept?  What keeps all things in unity is love, grace, mercy and kindness.  Sounds like fruit of the Spirit…my faith can bite into that!

But vacation is not the “real world,” right?!!  Sitting on the edge of the surf, digging toes into sand looks little like the grind of everyday.  Knowing this, I turned to Jeff and said, “We have got to find a way to get over here as often as possible!”

And we did.  We jumped at every convention or continuing education opportunity available on any of the Hawaiian islands.  Doing so, we found ourselves on Maui or Kauai more often than the other islands.  We vacationed with my parents one winter, met friends from Australia “half way,” and purchased condos at fund-raising auctions…all very intentional.  Whatever it took to make it happen, we did.  Including downsizing to a smaller mainland home.  This was our contribution ingredient…one-part effort.

Our muscle in creating, what was evolving into a dream, was not the only strength at work.  At some point, early in our adventure together, seeds were planted in both Jeff and I.  Sprouts broke the surface separately within us, but it was undeniable, it was the same desire.  We were unaware of what was growing, but we were in complete agreement that we wanted to pursue this longing.

This part of the recipe was like a wild herb growing strong and fragrant.  Each year, as I got wind of the scent, I was asking, “When are we going back?”

Occasionally, we would travel to other locations that we enjoyed.  Frequently on these trips (usually a less expensive and easier to get to destination) Jeff would ask me, “If, when we retire, we could have a second home somewhere else, where would you want it to be?”

Years into this routine, on an anniversary getaway, Jeff brought the same question.  This time, however, I turned to him and retorted with a question of my own.

“Why do you keep asking me the same question?”

“I looked into it, we cannot afford a home there.”  He replied.

A fire was lit within me.  He hurt me by working alone and I was angry that the vision was burnt.

It was this moment that I took up the wild herb.  Like Scarlet O’Hara in Gone With the Wind, I held tight to this gift.  I believed that if God had planted one specific location on this planet, so deeply into both of our hearts, cultivating it over time, it was going to thrive no matter what the outward signs.  And I said so.

I considered this a “God portion.”  God had blessed us both with a desire…the same desire…and it had a mouthwatering aroma.

AWAITING THE MARRIAGE OF COMPONENTS 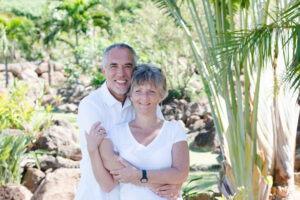 United, from that point forward, we looked at the possibility differently.  A good friend of mine often used a mantra, “If it’s God’s will, it’s God’s bill,” with her mission trips.  I took on that attitude of confident faith with what we began calling our “Hawaiian Dream.”

I caught wind of an organization called Christian Hospitality Network (CHN).  Its mission was to offer places of retreat and renewal for Pastors and Missionaries at discounted rates or free of charge.   What a wonderful cause!  We tacked that option onto our growing desire and began talking publicly about “plans.”  We polled some of our favorite Pastors and Missionaries to see what characteristics they would prefer in a place of repose.

As time passed, the CHN looked less like a possibility.  Our finances didn’t balance with our sophisticated tastes.  Real estate prices increased over the span of what was now 25 years of projecting, and our preferred town had grown and changed.

Despite the bitter parts, it was clear God had blessed the sale of our business.  The timing was as perfect as landing a coin on edge.  That knowledge has given strength to my faith.  It has not, however, reconciled the rest of the unknowns.  There is more faith to be developed because elements remain outside of our abilities.

Here is where I stand.

We are currently on the big island, minds and hearts ready to begin looking at property.  The great mystery still awaiting addition to the pot is the home itself.  The main ingredient!  What will make it heavenly?  Hard as I have tried to figure out the future, I do not know.  However, there is joy in the anticipation, because I know it does not matter.  The Lord will provide…and I will be satisfied.

The wisdom of experience brings peace.  I have lived long enough, experiencing both sufficient pain and love, to understand that God keeps stirring in beautiful blessings.  God’s creations are good.  He says so, do I agree?  If I can align my palate to His, I can untether from the need to be the one with all the ingredients.

Quarantine keeps the waiting alive.  I hover over the stove, breathing deep the fragrances of a tropical dream.  I am antsy…excited…anticipating with an increasing hunger…tasting again that the Lord is good.

11 thoughts on “Cooking Up A Hawaiian Dream”