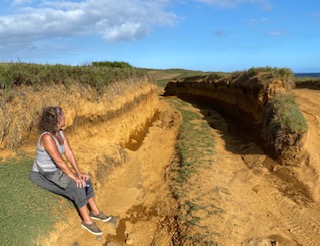 Unfamiliar territory can trip me up!  Recently during a delightful outing, a single unknown caused me to loose all peace and joy because I let fear carry the conversation the entire way.  The experience is teaching me that I have not mastered my mind.  How I approach new things has become deep set in my psyche and, frankly, I want to walk out of the ruts!  So, I continue on a pilgrimage to reroute the circuits…the habitual “cautious” thinking…that has had the potential of destroying my spirit.  Let me walk you through what happened:

Last weekend Jeff and I went on a hike to Papakolea Beach.  This famous location is also known as the Green Sand Beach.  It’s name is due to the emerald hue of the sand in a protected cove on the south shore of Hawaii’s big island.  I’d never heard of Green Sand Beach, but a good friend of mine suggested it as an attraction worth seeing.  Thus, a line item was added to my bucket list.  With a Saturday open, and a curiosity for what sea-green looks like on solids, Jeff and I set out on an adventure.

One of my goals, while staying in Hawaii, is to put muscle to the desire of increased activity.  I hear whisperings of use it or lose it.  I’m middle-aged and weaker than I care to admit.  My body isn’t as pliable as it was a few years ago and I don’t mend quickly from overextension.  I need activities that are appropriate for my physique today.  Hiking seemed just the thing to satisfy a want and a need. 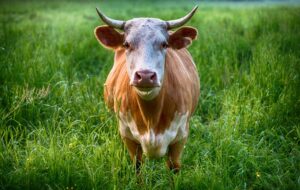 To get to our destination, we drove over an hour south on Hwy 11, turning oceanside on South Point.  The road turned from highway to single lane as we passed lush pastureland.  The scenery was delightful!  Cattle grazed kelly-colored grasses.  Windmills slowly turned as if in slow motion.  Modest clouds misted our windshield, but then quickly held up as if they realized a mistake had been made.  Oops!  Sorry!  I didn’t mean to get you wet!

TRYING TO LOOK AHEAD

Winding our way to end of the lane, we found a lot and parked.  First, we fueled by eating our picnic lunch.  While enjoying the meal, I curiously watched people leave the parking lot, taking note of hiking boots and muscle definition.  Another car arrived, the woman driver slipping long shorts over her bikini and hefted a backpack before setting out.  Where were the soft-sided, graying visitors like me?

We were approached by a man asking if we wanted to pay for a ride to the site.

I felt a tightening in my belly.  Was this too much of a walk for me?  As I exchanged my flip flops for sneakers, a large SUV pulled in.  Why hadn’t I thought to bring socks?  Four miles of canvas on skin might just rub me raw.

The occupants of the big vehicle tumbled out and I exhaled a breath I didn’t know I had been holding.  These four individuals were easily in their sixties, wearing typical tourist garb down to the sandals.  Rejecting the same offer for a ride, they headed down the fragmented road.

It’s funny how the smallest of affirmations can quell a question.

Before the pavement turned to trail, my assuring quartet turned back and headed towards the parking lot.

“Is this the yellow brick road?”  I asked, my friendly tone disguising concern.

“We aren’t prepared for this.  We’ll have to come back another time.”

I swallowed.  Were we prepared?

But now was our time to follow the broken pavement, setting out for the moss-toned seashore.  I set my jaw…we would do this!

The terrain was not terrible, its challenge was in the loose rock and uneven ground.  On an incline it was slippery.  The path reproduced into several tracks, trailing everywhere without any signs of direction.  Did all roads lead to Rome?  Or could we get lost?  Jeff suggested we stick to the route closest to the coastline.  That sounded wise.  We persevered with this plan.

Mid-way we came upon ruts in the soil like I’ve never seen.  Some of these ruts were significantly over my head!  That’s a well-traveled track!  It took some effort to walk out of those ruts.

A definition of rut per Merriam-Webster’s Dictionary is “a usual or fixed practice.”

While I was certain the numbers of people (and vehicles) passing that way were probably well past hundreds of thousands, I doubted that they were the sole activity creating grooves this great.  I guessed that once a channel had been carved, water and wind also found ease in following those routes.  Over and over the same place…a repetitious grind.

Knowing it best to keep moving, we continued, sometimes seeing others ahead on parallel trails, but often only the two of us in sight.

Over an hour later we arrived!

All those roads must have converged because people were in plenty.  There were ocean swimmers, wave hoppers, sun bathers and ball players enjoying the Green Sand Beach.  Even a couple boys tried sledding the sand hill.  All having a great time while I took in the scene.

I’d report the color of the beach as olive…a yellow, gray version of green.  Not beautiful in the way that the fertile grasses we drove passed had been.  And not impressive as the deep furrows we’d maneuvered on our trek.  But just different enough to make an attraction.

Resting atop the bluff, feeling hot, sticky, swollen and tired, I had not even given thought to bringing a bathing suit!  Frankly, I was afraid that if I took off my tennies I would never get them back on for the two mile journey back.  What was more concerning…why wasn’t I ecstatic about my success?

It was then that I began my internal fret of doing the hike again!  We were only half way through.  Long gone was the excitement of new discovery and the adrenaline to get me going.  Surely, I’d be bloody with blisters with the hour long hike back!  With shoulders turning pink in the sun, and the drive back to Kona yet ahead, we turned back to those well-worn trails.

STUCK IN A RUT

Head down the whole way, I slogged.  One scary slip and turn of ankle, and I snapped an unkind word at Jeff.

And then again came the passing through the mammoth ruts.

It occurred to me that all the fear-based thoughts that had been ruminating all afternoon were digging into my spirit like these ruts.  One innocent what-if-I-can’t repeated itself ragged in the fissures of my mind.  One anxious thought divided and multiplied into many, running wild like a river spilling its banks.  All negativity found its way into the grooves digging deeper and deeper still.  My weekend excursion had become an erosion of joy.

What had I let happen?

The point of the trip…I realized then…was never the beach.  That was made clear by the lack of towel and suit.  It was the journey that had mattered most.  All the agitated accounts in my head had been about surviving the trip. But now…(see?!!)…now I could say that I made it to Papakolea Beach because I had hiked every step of the way while fear was running rampant.  Even when.  Even while.

I built some major muscle in this exercise.  And my eyes were awakened to the sneaky rut thinking that falsifies and deteriorates reality at a rapid pace.  If I had not determined ahead of time to finish, I would have quit.  Fear does that; fear kills.  Yet perseverance built a mental strength that overcame fear…a victory over negative nelly giving me confidence in my ability do difficult things.  Not just in hiking new territory, but in life’s mysterious journey. I saw that I could walk out of the ruts of my fear-based thinking.

It’s time to plan the next weekend expedition.  This time I resolve to assume the I can attitude, staying mindful of how remaining hopeful is how I choose to live.

“We can rejoice, too, when we run into problems and trials, for we know that they help us develop endurance.  And endurance develops strength of character, and character strengthens our confident hope of salvation.” -Romans 5:3-4